Vol.11 In Praise of Pen Cases

The first time I fell in love with something made from leather was when I was 21 years old and studying at a university in Tokyo. The year must have been 1981 or 1982. I was in a department store in Shinjuku when I happened to pass the stationary goods section . I wasn't planning to buy anything there. I was just passing by. But something caught my eye.

It was a small leather case, maybe 15 centimeters long and five centimeters wide. It was black with a dragonfly pattern in a pretty cream color. I stopped and picked up the case. I was surprised how light and soft it was in my hand. I turned it over, appreciating its butter-like feel . It had a zipper on the side and I realized it was a case for pens.

The price seemed very expensive to me. I was a student , living on a tight budget and I never bought anything unless I absolutely needed it. I definitely didn't need something to put my pens in, but I bought that pen case anyway.

I grew up in the United States, where there is no custom of keeping your pens in a case. In school we used pencils that we all shared, and at the end of the day we put them in a jar on the teacher's desk. We didn't have pencil cases and we didn't carry our pencils back and forth between home and school. 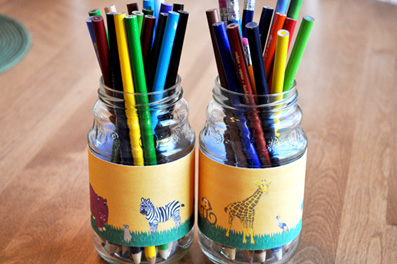 But I quickly developed a habit of keeping my pens in that pen case. I used it all during my studies in Japan, and every day when I took it up in my hand I enjoyed its luxurious feel . I began to notice that the Japanese students around me all carried pen cases too.

After two years of study I went back to the United States. At first I carried my Japanese pen case to my job in New York, but my co-workers mostly used cheap pens that floated from desk to desk. After a while I left the pen case at home. We moved several times and somewhere along the way the pen case was lost.

In 2000, I moved back to Japan. This time I had children and I put them in Japanese school, where I was surprised that every child was required to have a pencil case. My children were taught to organize their pencil cases every evening, making sure they had three regular pencils and one red pencil, sharpened and ready to use the next day. I could see that learning to care for one's tools is an important part of Japanese education, and that the habit carries on into adulthood. Business meetings never seem to begin until everyone has arranged their business-card case, glasses case and pen case on the table. 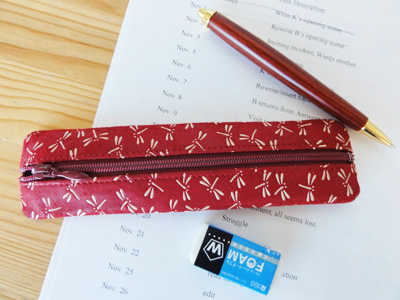 One day in a store I spotted a pen case very similar to the one I had bought long ago. It even had the same dragonfly pattern. The clerk explained that it was a traditional craft item called inden , made by applying designs in lacquer on deer leather. She explained that the old word for dragonflies was katsumushi (victorious insects), so hoping to win in battle, samurai often decorated their armor with dragonflies.

Strictly speaking, I didn't need a pen case. I do most of my writing on a computer, and when I do carry a pen, one is enough. It doesn't have to be in a case. But I bought that pen case anyway. And every time I pick it up, I feel how smooth and buttery it is and I appreciate the Japanese values of having beautiful things and taking good care of them .

« Vol.12 In France, taking off shoes is the same as taking off clothes | Vol.10 Japanese leather products in the eyes of an English gentleman »